“Our main objective of budget preparation is to alleviate poverty, reduce inequalities and bring basic and qualitative changes in people’s living standard. Regional parity, human resources development, infrastructure development as well as assuring quality of expenditure are focused in allocation of resources,” said the finance minister while placing the proposed budget 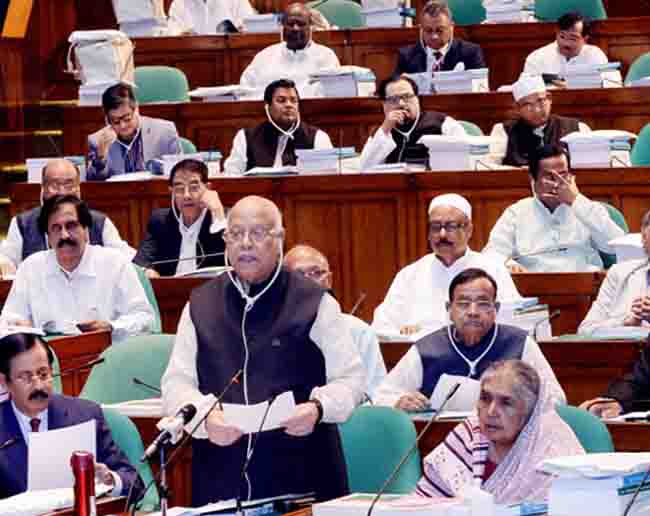 for FY19 styled ‘Bangladesh on a Pathway to Prosperity’ at the Jatiya Sangsad (JS).

According to the 166-page budget speech for FY19 that lasted for nearly 3.10 hours, Tk 2,91,573 crore has been allocation for non-development and other expenditures while the development expenditure has been estimated at Tk 1,73,000 crore.

Besides, Tk 7,869.17 crore has been allocated for projects to be implemented through self-finance of autonomous bodies.

The original ADP outlay for the FY19 is 16.59 percent or Tk 24,619 crore higher than that of the revised allocation for the current fiscal year of FY18.

“I believe that if we can use the huge external resources in the pipeline, we will be able to largely reduce our dependence on domestic sources and we shall, therefore, persistently make efforts to scale up the use of foreign assistance,” said the finance minister.

The salaries and allowances of government servants, interest payment and subsidies will account for over half of the non-development expenditure.

Besides, 25.30 per cent of total allocation has been proposed for general services and 4.78 per cent for Public Private Partnership (PPP), financial assistance for various industries, subsidies and equity investments in various nationalised corporations, banks, and financial institutions, 11.05 per cent for interest payment and the rest 0.54 for net lending and other expenditures.

“I believe that this target is realistic. Because, huge reforms in terms of manpower restructuring and business process reengineering have already been implemented in NBR. The economic activities of the country currently remain stable. The trend in tax compliance in the country is quite satisfactory and by ensuring the continuation of this trend, the revenue collection target appears to be achievable,” said Muhith.

The minister has kept the tax exemption threshold unchanged for the next fiscal year except that of the threshold for a parent or guardian of a person with disability will be Tk 400,000 in place of Tk 375,000.

He has proposed to reduce the tax rate of manufacturer and exporter of readymade garments to 15 percent and if any such taxpayer is a public limited company, the tax rate will be 12.5 percent. Any garment factory having green building certification shall enjoy a tax rate of 12 percent.

As Value Added Tax (VAT) is the single largest source of the government tax revenue collected by the National Board of Revenue (NBR), the minister proposed to bring truncated VAT rates down to 5 rates from existing 9 VAT rates. He also proposed to increase the price of cigar and supplementary duty on it.

“I expect that by implementing the budget proposals revenue targets will be achieved and culture of tax compliance will further deepen,” he added.

In his budget speech, Muhith proposed to expand social security coverage including rising the number of recipients of old age allowance, the allowance for widows and oppressed women, increasing the rate of allowance for financially insolvent disabled persons and transgender people.

He has also proposed allocation of Tk 400 crore in the budget to support insolvent war-wounded and sick freedom-fighters or their wives, children or grand-children.

Muhith has also highlighted the present government’s successes in meeting the energy crisis when GDP growth met target, inflation was also kept under control, and the country saw significant improvement of various administrative and financial services in the past one year.

While focusing on the policy-strategies and action plans, Muhith said he kept in view several background scenarios-1) the proper implementation of the Seventh Five Year Plan, 2) the promises of recently earned LDC graduation, 3) appropriate reflection of SDGs in many areas including sustainable and inclusive growth, industrialisation, productive and decent employment opportunity, education, health, women empowerment, environment management-climate change, and safe habitation, 4) structural transformation of the economy, 5) readiness for creating ‘Vision-2041’ in continuation of ‘Vision-2021’.

“Overall, we have taken into consideration the needs and necessities of the people in the context of ever-changing global and domestic realities,” he added.

Bearing in mind the reality of preference-erosion of the country’s exports after 2027 in the context of LDC graduation, the finance minister laid emphasis on strengthening the country’s competitive edge. Apart from the RMG industry, there will be attempts to diversify our export basket by focusing on jute and jute goods, leather and leather products, sports shoes made of cloth and polythene, frozen fish, processed foods, medicines and non-traditional products such as bicycles, he said.

“Side by side, we will strengthen our diplomatic efforts to explore and expand the free trade area in the international and regional spheres and extend the time-frame of duty free trade facilities,” he added.

Muhith said Prime Minister Sheikh Hasina has set our next target of becoming a happy and prosperous country by 2041. Following the roadmap set out in two Five-Year Plans spanning from 2011 to 2020, the country is progressing towards that desired target, he added.

“I once again express my firm conviction about the success of Bangladesh’s march toward prosperous future and on this optimistic note, I present the budget for FY2018-19 before this august House. I am sure that the people of all strata will participate in implementing this budget combining their initiative, creativity, participation and spontaneity,” he said while wrapping up his speech.

Prime Minister Sheikh Hasina, leader of the opposition Rawshan Ershad and cabinet members were present when Muhith placed the 5th and last budget of the present Awami League government that returned to power for a second consecutive term after January 5, 2014 polls.

In line with the legal procedures, President Abdul Hamid authenticated the proposed national budget for the coming fiscal and the revised budget for the outgoing 2017-18 before the finance minister placed it in the House.

The cabinet earlier in a meeting at the Sangsad Bhaban with Prime Minister Sheikh Hasina in the chair approved the budget, which is expected to be passed on June 30, the last day of the outgoing fiscal 2017-18.